New to the site?


If you're new to this blog and want some context for it, read this post from the day I announced my Alzheimer's disease and this post about the day I announced I had lost it. For more info, visit my website with my autobiography and all blog entries in chronological order for easier reading to catch up. There's also a sermon on the spiritual lessons I've learned through this journey through my damaged mind.

I looked up Alzheimer’s in Wikipedia last night.  I found the following chart. 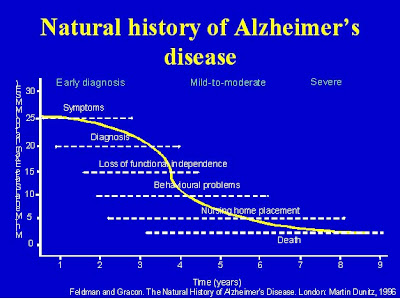 The first is that the time from diagnosis to death is, on average about nine years.  This chart, however, begins when the score on the Mini-Mental State Examination is twenty-five.  My score is still twenty-seven (although my neurologist seems pretty convinced of the diagnosis, anyway), which means that I’m still not on the chart yet, so the course of my disease is likely to be longer than the average nine years.

The second thing to notice is the steepness of the curve in the middle of the disease.  I’m still in the upper left flat part of the curve, but the graph shows a precipitous drop in functioning after diagnosis.  From formal diagnosis of dementia (a score of twenty-five) to nursing home placement is only two years.  Third, of course is the flatness of the curve after nursing home placement, about four years.  These are all average figures, of course, but still they give some indication of what’s in store.  I’m just wondering how long real consciousness of self, being in touch with reality, lingers.

Marja seems, increasingly, to accept the diagnosis, although she expresses some surprise that it has not highly affected her emotionally.  (I suspect that will change considerably once symptoms become more obvious and she begins to lose “me.”)  I, too, seem to take it with a bit too much equanimity, probably because with the mildness of symptoms, it doesn’t yet feel very real.  It’s true that there are those gut-wrenching moments when I begin to realize the vastness of what’s coming, but those are uncommon … and none in the past ten days or so.
Posted by David Hilfiker

To stimulate conversations please use the Comments section respond to a post. But you may also contact me directly via email.

What is this blog

In September of 2012 I was diagnosed with cognitive impairment, probably Alzheimer's disease. This blog is the story of my day-to-day life with this illness and my reflections upon it. We tend to be scared of Alzheimer's or embarrassed by it. We see it as the end of life rather than a phase of life with all its attendant opportunities for growth, learning, and relationships. We see only the suffering and miss the joy. We experience only the disappearing cognitive abilities and ignore the beautiful things that can appear.

On October 30, 2013, the diagnosis was significantly downgraded to "subjective cognitive complaints." The blog posts before that date are written with the understanding that I had Alzheimer's, now unlikely. Since that time I have written of the uncertainty about what has caused my damaged brain.

David Hilfiker
Washington, DC, United States
I am a 68-year-old retired physician and live with my wife in the nation's capital. I practiced for seven years in an isolated rural area and then for ten years in an inner-city neighborhood. In 1990 we founded Joseph's House, a home for homeless people with AIDS and cancer. I have continued to write, teach and lecture about poverty, politics and other issues. I am writing this blog to dispel some of the fear and embarrassment that surrounds Alzheimer's and other cognitive impairments.